Last Wednesday Rich and I, along with my brother Don and sister-in-law Linda,  took a quick, 4-day trip to the Upper Peninsula of Michigan. 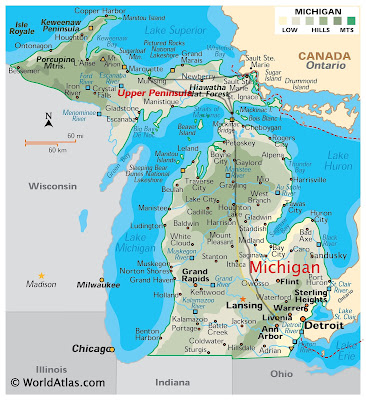 We started at our house in Plymouth. My brother drove so he picked us up a about 9:00 am.  We went all the way to Sault St. Marie (pronounced Soo) on the first day, about a 4-5.5  hour drive. It's about 4 hours to the Mackinaw Bridge and another hour or so to Sault St Marie after that.

We took our time and got to the Mackinaw Bridge at about 1:30 or so. We had lunch at a restaurant in Mackinaw City called Dixie Saloon. 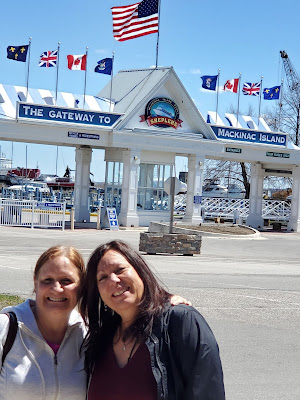 Here is Linda and I in front of one of the ferry docks to Mackinaw Island. We did not go to the island this trip.

After lunch we drove to a park that has a good view of the Mackinaw Bridge so we could take some pictures before crossing it. This just happens to be the season for midge flies up there and they were swarming so bad in the park and by the water that we could hardly stand to be outside of the car more or less get a good picture of the bridge! Yuck! 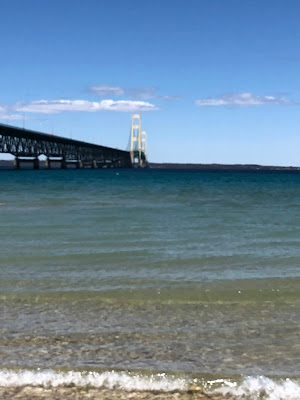 This was the best I could do really quick before I was covered with bugs! Luckily they are not biting bugs!

We crossed the bridge and arrived in Sault St. Marie about around 4:00. The first thing we did after we checked into our hotel was go to the Soo Locks. These are locks built between Lake Superior and Lake Huron.

Just a brief history: Before the locks were built there was a rapids between Lake Superior and Lake Huron that dropped 21 feet in less than a mile. Therefore, ships could not pass between the lakes.  The Soo Locks opened in 1885. 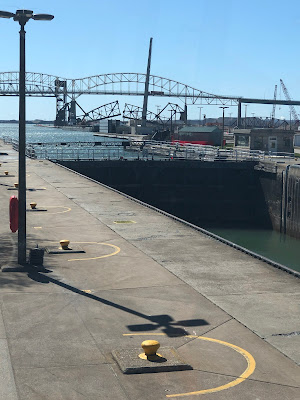 Can you see the difference in water levels here? That is Lake Superior on the other side of the gate, so much higher than Lake Huron on the inside of the canal or lock chamber as they are called. It looks like it's going to spill over!
The bridge in the background is the Sault St. Marie International Bridge between Sault St. Marie, Michigan and Sault St. Marie Ontario Canada. 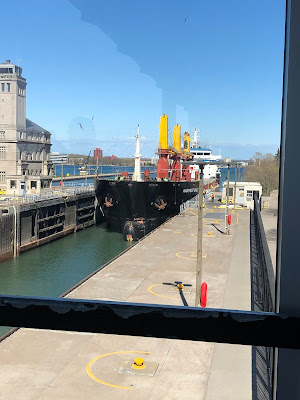 We were lucky enough to be there when a freighter needed to go through the locks. The picture at the top is the gates opening on the other side and the bottom picture is a freighter entering into the lock chamber from Lake Huron. 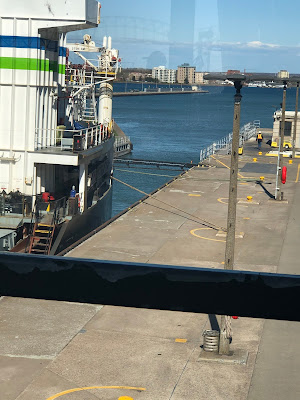 Once the freighter is all the way into the lock chamber, the gates close and the filling valves are opened. There is complicated machinery involved but the locks rely on gravity to fill and empty the chambers. 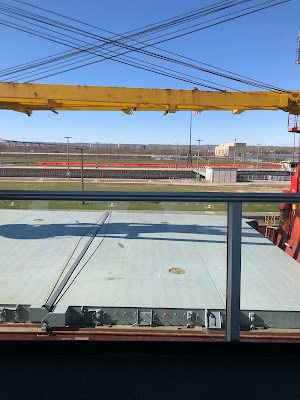 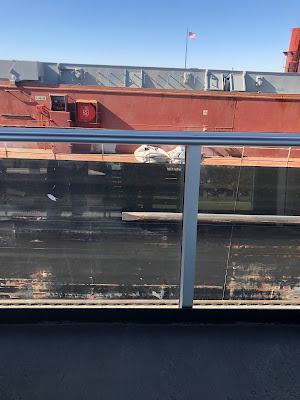 These two pictures are of the freighter from the same area. The top picture is of the deck when it first entered the lock chamber and the second picture is the same area after it has been raised 29 feet!
The freighter is now at the height of Lake Superior. 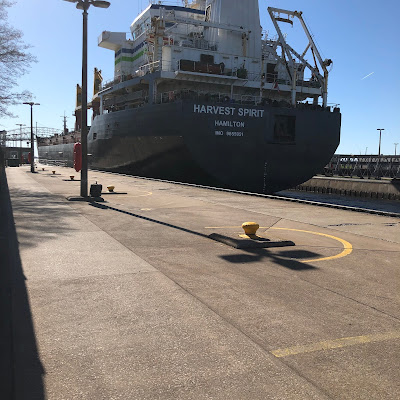 The gates open and the freighter can continue on it's merry way!
The whole thing took about a half an hour from the time the freighter entered the lock chamber to when it left the other side. Those things move slow!
Although I've been to the Soo Locks many times in my life, it's always fun to watch. Rich and I even took a boat tour through the locks several years ago and it's even more exciting to be on a boat in the chamber going up and down!  Unfortunately, they hadn't started running them until after we left!
Next time I'll tell you about Whitefish Point.
Until then stay safe and well my friends!
Posted by Jeanette at 4:58 PM

My husband would love this - having served in the Navy and the Coast Guard. I would love to visit Michigan. I have a friend who has a Lavender Farm.

How nice you were able to get away for a while. Sounds like fun.
It's amazing and interesting how the locks work!!

What’s fun road trip! I’ve only been to Sleeping Bear Dunes, nothing in the UP. That would be neat to see the locks at work. I’ve watched the freighters in Cleveland. There’s a website that’s in real time so you can see the name of the freighter and where it originated and the destination.

I love visiting the UP and Mackinaw. We've been to the Locks several times too and it's so interesting. We never went through on a boat though.
I also like Whitefish point. It's beautiful!

So glad you had a nice getaway. I would love to see that in person, it just seems kind of surreal to me!

Wow, I would have loved to see the locks in action!! Very fascinating, especially how much water it would take to raise it up those many feet! It was neat you guys got a chance to do a little adventure like this! Looking forward to hearing about more of your trip!

Interesting, I did not know about any of this! This is a beautiful place.

I have never been to Michigan, but I've heard of Mackinaw island many times.
The lock situation is so very cool. Can you imagine the first people to come up with this concept AND make it work?
We have those types of locks at Lake Okeechobee where my inlaws live and I've also seen this happen in Panama at the canal there. Very cool.
The midge flies sound horrid though.

Fascinating! Great photos. I have always enjoyed being in Chicago and going on a boat tour out onto Lake Michigan, and waiting to go through the locks. Looks like y'all had great weather! I want to know where you went to eat! xoxo

That's a beautiful trip, isn't it, Jeanette. I'm sooo glad you got to go and had a great time. The UP of Michigan is a gorgeous portion of both Michigan and of the United States of America. My parents and I went to Mackinac Island when I was a little girl but I don't remember it at all... and then our oldest daughter & her family took a vacation there, for a week, a couple years ago. Thank you for sharing your wonderful time with us readers. I enjoyed it very much! ~Andrea xoxo

Beside a babbling brook... said...

AWESOME!!!! So much fun, thanks for sharing. smiles

What a nice road trip and it looks like a pretty place to visit. I'm glad the bugs weren't biting bugs. Down South we have mosquitoes like crazy!