We have finally cooled off here a little. The past two nights have been in the 50's which makes for some really good sleeping!

Last week I hit another Estate Sale. When I go I usually look for jewelry and toys for the kids. This one didn't have any jewelry but the basement was full of toys! 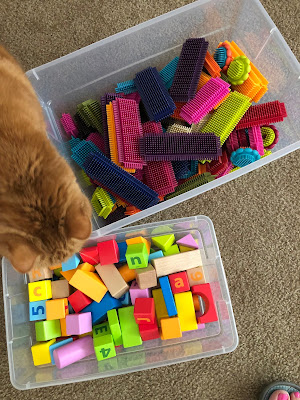 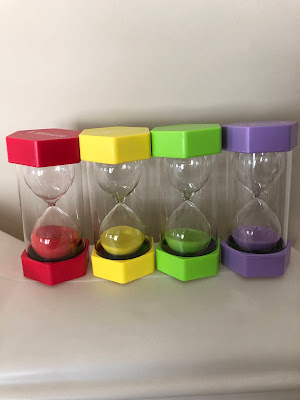 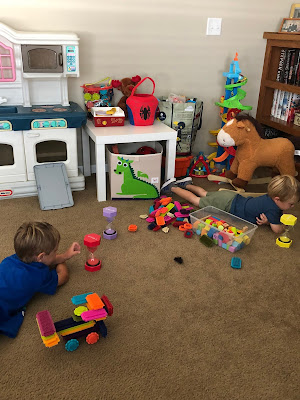 I washed everything in a little bleach and water. The boys loved them!

Work is going pretty good. I worked an extra day this week but I didn't mind because I had nothing else to do. I'm only scheduled for 13 hours a week so 4 more hours is no big deal. 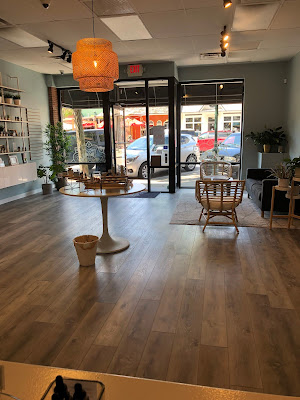 Here's a view of the store from the counter where the cash register is. It really is a nice place to work.

I think I mentioned that I bought a set of knitting needles and yarn at the thrift store. 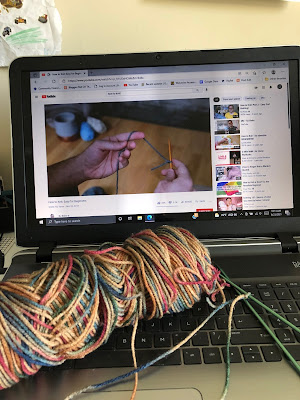 I started to teach myself to knit. I'll need lots of practice to get over my fat fingers!

Lastly since I'm employed again I decided to treat myself today. 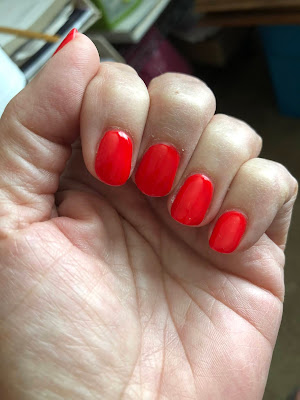 I got a manicure. The last time I had a manicure was before Shauna and Brad's wedding in 2015! It's just not something I'm in the habit of doing. But I like the way it looks so maybe I'll continue.

Saturday the 11th we are keeping the boys overnight so Shauna and Brad can go to a wedding. We promised them we would go to the park and dinner so hopefully the weather cooperates!

Chris is coming into town on the 14 for a week. We are all going to the Michigan Renaissance Festival while he is here. It's been going on since 1979 and I have never been so I'm excited!

That's all for me for now.

The One Where We Babysat For Days

I think I'm going to start titling my posts like Friends episodes used to be!

Shauna and Brad went to Las Vegas last week for four days. On Monday morning they dropped the boys off at Brad's mom Sandy's house, we met them there and took them to the airport.

They stayed with Sandy the first night. We picked them up on Tuesday after dinner and took them to spend the night at our house.

On Wednesday we took them to a local farm to see the animals and to take a wagon ride. 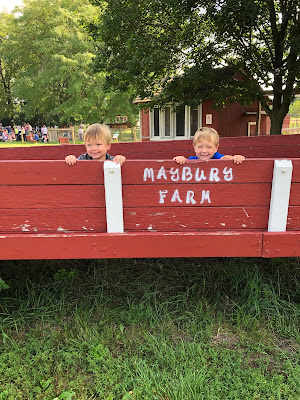 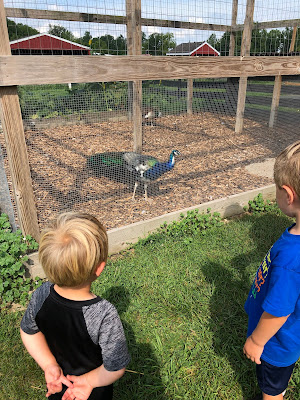 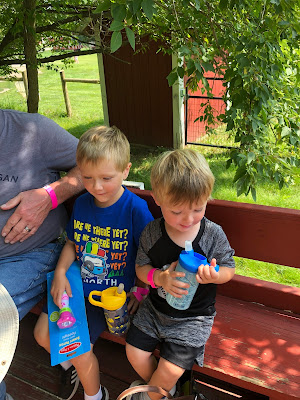 I have to say they were not impressed with either! It was pretty hot outside and not a lot of shade. I thought they would be excited to ride the wagon because it was pulled by a tractor, and they love tractors but eh....

Later that day we took them back to their house for the night because Shauna and Brad were coming home on Thursday. 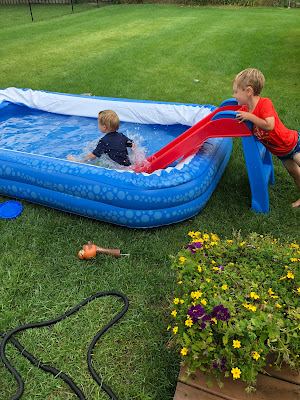 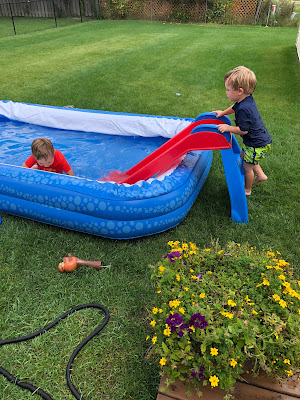 We filled their pool and and they had fun pushing each other down the slide into it! On Thursday we were going to take them to dinner and the dairy queen for ice cream but we ended up just staying at the house and getting pizza for dinner. It was so hot and to tell the truth, strapping them into their car seats is a real PITA! No wonder Shauna doesn't take them a lot of places by herself!

Anyway, Rich picked Shauna and Brad up at the airport and they were home by 7:45.

It was exhausting but such a joy to be able to spend so much time with these guys!

On Friday I went to a local thrift store because they were selling all their clothes for 50% off. I bought 4 sleeveless tops, one long and one short sleeved t-shirt, knitting needles, a skein of yarn, and a bunch of pipe cleaners for a grand total of $14.84! Gotta love thrift stores!

Work is going good. I ended up having to work on Saturday from 2-7 by myself because the person I was supposed to work with had a family emergency. It was my first time being alone but it went ok. I'm getting the hang of educating people on the benefits of CBD. A lot of people ask me if I use it and to tell the truth, I've only used gummies before to help me sleep. I think the owner, Kate, wants me to try everything eventually.

It's possible I may have bitten off a little more than I want to chew with this job, though. Besides Kate, there are only 4 other workers and when someone is on vacation or calls off for whatever reason, everyone else has to work extra. I know it makes me sound a little selfish to say this, but I only want to work 20 hours a week. I suppose that is the downside to working for a small business. Everything else is perfect though so we'll see how it goes!

Lastly, our community is having their bi-annual garage sale this weekend. It was cancelled last year so everyone is glad to see it back this year.  I thought this sign was pretty clever! 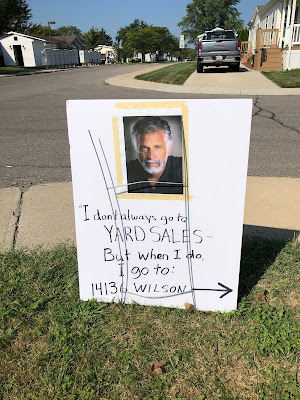 I told the people I liked their sign and they told me I could have it for free with the purchase of their 40" Sony TV.