Organizing and Feeding my Addiction

Back in June I posted about how I used a plastic tote bag to organize my paper rolls on my pantry door.

As I mentioned in the post I intended it to be a temporary fix until I found a better solution. I searched for a good over the door organizer but the problem was the opening at the top of the door was too small and anything on it would keep it from closing.

Finally I realized that I would have to use something that I could hang directly on the door.  I know, some things take my brain a while.... 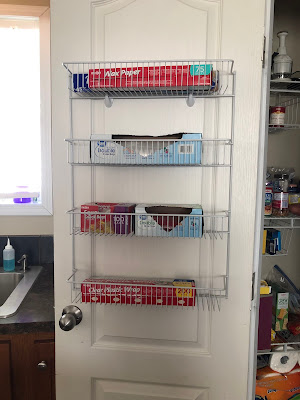 I found this four tier rack that is the perfect size.  It came with mounting screws but I don't want to drill holes in my door so I just used a couple of those handy little command hooks. It works great! The only thing is the sides of the shelves are open so if you swing the door too hard the rolls slide out of the side. I'll have to weave some string or something on each side to hold them in place. 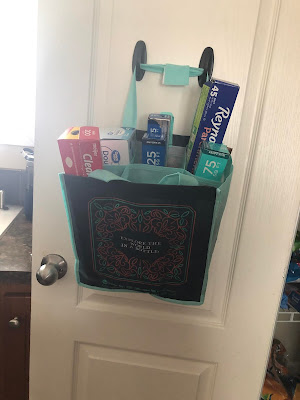 Looks so much better than this don't you think?
Also, since Christmas is fast approaching my addiction to snowman figurines is starting to surface. I took a look at my local Salvation Army store the other day to see if they had any and I found these two: 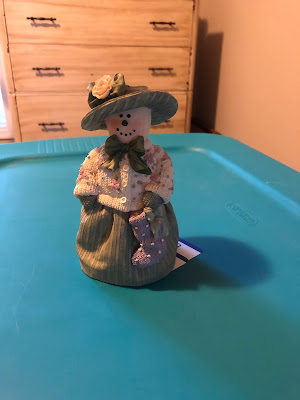 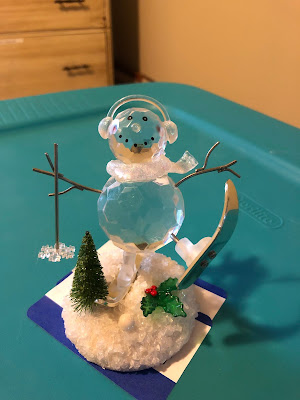 They are super cute! While I was there I picked up a ceramic cookie jar and the lid fell off and smashed on the floor! I took it up to the cash register because I figured I broke it so I should pay for it. The cashier said I didn't need to and promptly threw it in the garbage! I felt bad but was glad because it was $6!
I also found this snowman when we were at Bronner's a few weeks ago. 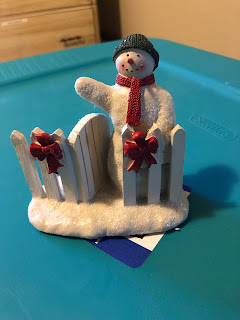 The picture really doesn't do it justice. It's all sparkly and is very pretty!
I probably should stop looking for them now as I have three new ones already and it's not even November!
Maxwell and Levi are doing really well in school. Neither one of them cries anymore. I went with Shauna to pick them up one day and they both look so little coming out of their classrooms!
That's it for me for now.
Next weekend we are (hopefully) going to go on a lantern lit hike at Island Lake State Park and on Sunday we'll be going trick or treating with the boys!
Until the next time stay safe and well my friends!

Beside a babbling brook... said...

Top picture. My husband put up a similar rack, on the inside of our pantry door. It is a 'size', where I can put those items, on their ends.

Ohhh, a lantern lit hike! Sounds fun, but I would never make it! I'd stumble and fall, with the first or second step!!!! -grin-

I hope you can get photos of the lantern hike. Love the snowmen! How nice that they didn't ask you to pay for the broken lid. I have a rack very much like this hanging from the back of our kitchen door.

The snowmen are cute - I haven't thought about decorating for Christmas yet and this year the husband will be in charge as I will be recovering from rotator cuff surgery.

Ohhhhh I really liked the bag hanging, really I did. The snowmen are adorable and collect snowmen too, grin. I hope you have a beautiful weekend.

Yes, it now looks neat and tidy!!
Your snowmen are so cute.

I love seeing organizational finds, that's a good one.
Snowmen are a favorite of mine too.
A lantern lit hike sounds so fun!

One of my kitchen drawers is my bag and roll space and it's a nightmare, everything is tangled up in there. Your idea is brilliant but I haven't a door to hang it on.
Briony
x

That rack is perfect on the inside of that door. I would have done the command hooks too. Those things are great.
Love the snowmen. I haven't bought any new ones in a while. Maybe I need one this year :) I did buy a couple new things to add to my Christmas village though.

My daughter has a small collection of snowmen...the ones you found are adorable.
(Nice door fix)

Oh wow... what a great rack! That's the perfect solution!!

Bravo on the pantry organizing, but I can picture myself flinging the door open and everything flying at me. :)
The snowmen are so cute!!
Have a great time trick or treating with the boys; share pictures.

That rack is such a versatile and brilliant way to increase your storage!